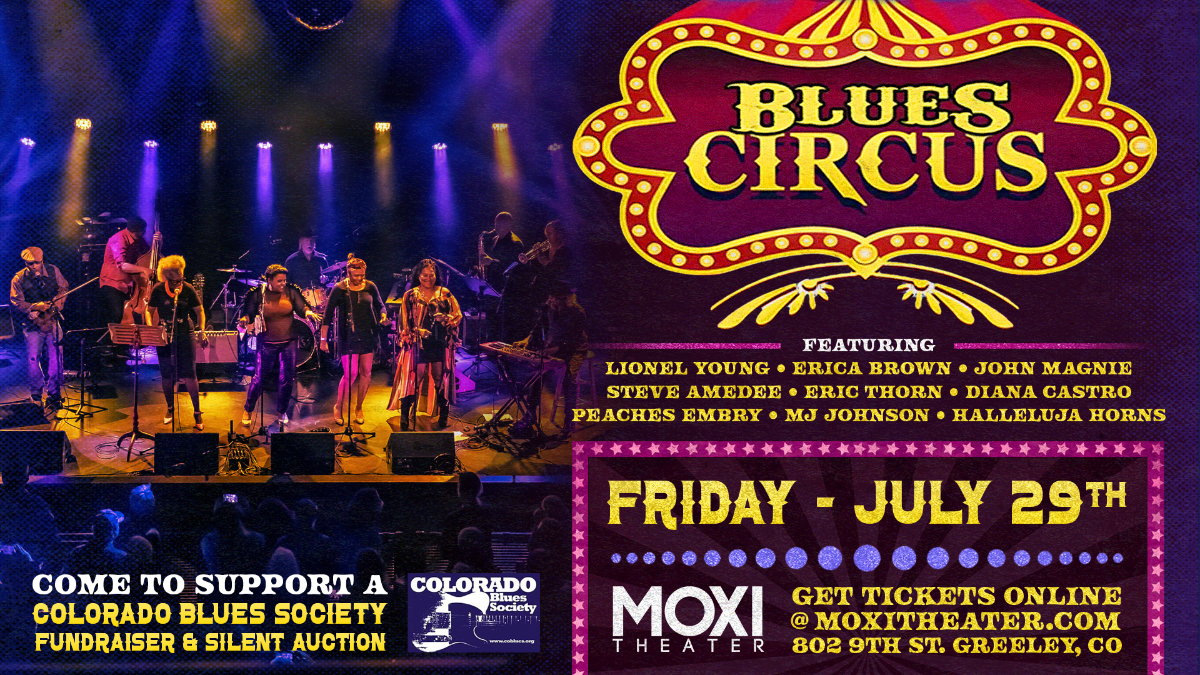 The rest of the band is: John Magnie on piano, organ, and vocals, and Steve Amedee, on drums and vocals, who both backed up classic blues artists like Earl King, Irma Thomas, and Ernie K-Doe in New Orleans in the 70s and 80s before they became the subdudes and moved to Colorado in 1987.  Also: Eric Thorin on upright bass, and the Hallelujah Horns: Greta Cornett on trumpet, and Phuong Nguyen on sax.

The rest of the band is: John Magnie on piano, organ, and vocals, and Steve Amedee, on drums and vocals, who both backed up classic blues artists like Earl King, Irma Thomas, and Ernie K-Doe in New Orleans in the 70s and 80s before they became the subdudes and moved to Colorado in 1987.  Also: Eric Thorin on upright bass, and the Hallelujah Horns: Greta Cornett on trumpet, and Phuong Nguyen on sax.
Lionel Young
Erica Brown

Erica Brown, Blues at its Finest!!

Erica Brown is a bona-fide Blueswoman. She has worked with some of the finest artists in the world, and has shared stages with such heavyweights as B.B. King, Al Green, Delbert McClinton, Tab Benoit, Kenny Neal, Ronnie Baker Brooks, Bob Margolin, Lionel Young, Kenny Wayne Shepard and Debbie Davies.

As frontwoman for the Award-winning Erica Brown Band, Erica electrified audiences all over the Rocky Mountain region with the band’s brand of searing blues rock. The band won every award the region offered, including Best Blues Band (Westword Magazine) Best Underground Blues Band (Denver Post) and The Rocky Mountain News’ Best of in the Blues Category. The band released two critically acclaimed CD’s, “Body Work” in 2000, and “Rough Cut Stone” in 2003.
Erica was dubbed “Denver’s Queen of the Blues”, a moniker that was used by the Altitude Network in their concert showcase feature “OnStage”, which was broadcast to five million households in ten western states in 2005. In 2008, Erica went solo, and with the help of a host of top-notch musicians, has been continuing to spread the word of the blues locally, regionally, and nationally!

Erica’s credits include:
Her vocals were featured in the Sony Pictures movies, “The Fan”, with Wesley Snipes and Robert DeNiro in 1996, In 2005, she appeared on the acclaimed CD “African Wind” released by the Northern Blues Label. She lent her voice to several tracks of the CD “Smoke and Mirrors” released by MojoHand Records in 2006. In 2008, Erica sang on the CDs “Beautiful Day” by Two-Time International Blues Challenge Winner Lionel Young, as well as stretching out into Americana on “Cipher” the internationally acclaimed CD by Slim Cessna’s Auto Club. She also contributed to a track on Rock genius Xiren’s CD “Trip-R”.

Never one to shy away from a challenge, in 2011 she brought her Blues sensibility to seminal garage/punk band Barstool Messiah’s CD Bastards of Bacchus, as well as appearing in the legendary rap/punk band Warlock Pinchers’ Reunion Concert video, which also featured members of the Melvins.

In 2012 Erica will be awarded the Five Points Jazz Festival’s Tribute Award for significant and lasting contributions to jazz and culture in the Five Points, Denver neighborhood and throughout Denver.

John Magnie
John is founding member of the Subdudes and Denver native. He currently resides in Fort Collins. After a stint in New Orleans where he met and came together with his most well-known band, The Subdudes, Magnie brought the rest of the band west and settled in Fort Collins during the years when housing was affordable and airport traffic was lighter. His soulful baritone voice is a familiar part of several of our most beloved music groups including Three Twins, Young Ancients, The Magnie Family Band, and most recently, The Del Shamen with his Subdudes bandmate Steve Amedee, Firefall’s Jock Bartley, Nick Forster from eTown and Hot Rize, and Eric Thorin, an in-demand local bass phenom.
Magnie’s songs are known for their uplifting lyrics, catchy hooks, and incessant grooves. He moves from funk to blues to ballads to R & B with a facility nurtured by influences from Professor Longhair to Doctor John to Jackie Wilson. His audiences are brought together with a compelling urge to clap, stomp and sing along for an evening of music that will not be forgotten.
The Subdudes are an American roots rock group from New Orleans. Their music blends folk, swamp pop, New Orleans rhythm and blues, Louisiana blues, country, cajun/zydeco, funk, soul and gospel with harmonic vocals. Their sound is notable for the band's substitution of a tambourine player for a drummer. The subdudes formed in 1987 through a music venue in New Orleans called Tipitina's.
Steve Amedee
Steve plays Percussion in the Subdudes and now alongside his band mates in Blues Circus.

Over the course of 25 years and ten albums, the Subdudes have quietly become one of America’s national music treasures.

Led by singer/guitarist Tommy Malone and accordionist, John Magnie, The Subdudes draw most of their inspiration from the sounds of their native New Orleans, blending blues, gospel, funk, and R&B with their own harmony vocals; their sound is also notable for the band’s substitution of a tambourine player, Steve Amedée,  for a drummer. Tim Cook rounds out the band on bass.

Their music features an intoxicating blend of passionate, joyous roots music, not to mention some of the sharpest musicianship and ensemble playing you’ll ever hear from any musicians. More than a just a concert, the “dudes” leave you feeling like they’re having a party and you were lucky enough to be invited.
Eric Thorn
Diana Castro
Peaches Embry
Blues singer/songwriter Peaches Embry has been emersed in music since childhood. Her life journey through gospel, jazz, R&B and blues, has constructed a rich and diverse platform for delivering a full musical expression to her audiences. She has been entertaining audiences in Northern Colorado for quite some time, starting with the Linden’s era and has shared the stage with some of our nation’s finest blues performers.
MJ Johnson
Hallelujah Horns