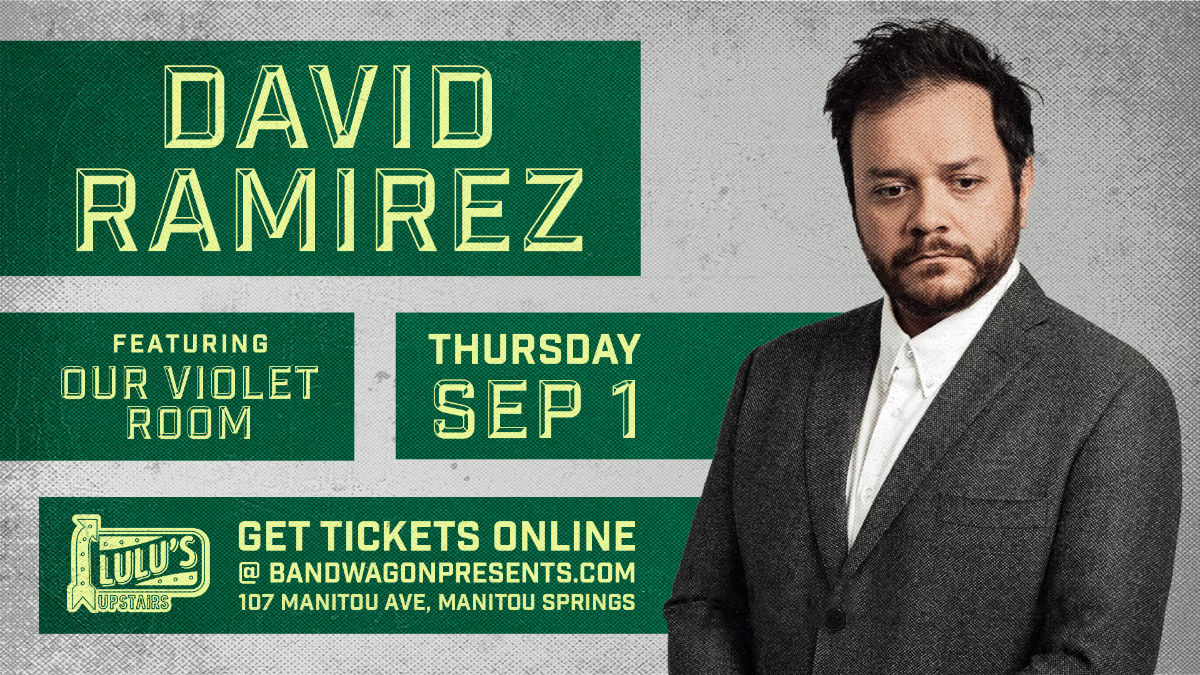 "It's not easy for a writer to maintain the aura of the unspoken in a song. Music and the space surrounding it intensify the impact of confession; the true challenge comes in giving voice to a narrator who's tongue-tied, or simply reticent. Texas singer-songwriter David Ramirez does so beautifully…” — NPR Music

How do you write love songs when you’re heartbroken? How do you sing about hope and passion when yours is lost? How do you finish an album when the relationship that inspired it has ended?


Lulu's Downstairs is operating at Full Capacity
Reserve a Booth in Advance Online.
All Responsible Ages Permitted
*PHOTO ID REQUIRED FOR ENTRY
Artists
David Ramirez
David was born in Houston, TX and grew up in a suburb called Sugarland. Although he took piano lessons as a kid, it was baseball that was his first love. He played baseball until his junior year in high school, when upon changing schools was invited by his new fellow classmates to audition for a school play.  He got the part and realized how much he enjoyed performing.  This new love of performing motivated him to pick up an acoustic guitar and begin writing songs.

While attending college in Dallas, he formed the David Ramirez band, an acoustic folk-pop act. After receiving local acclaim for his songwriting, he decided to move to Nashville to try his hand at becoming a professional songwriter. After about a year in Nashville, he realized the Music Row songwriting game was not his cup of tea. And after being fired from his job at a coffee shop, he packed his belongings into his Kia Rio car and hit the road. Without a booking agent or manager, he toured from city to city playing open mics, house shows and dive bars…anywhere that would pay enough money to make it to the next town. He got by on the help of strangers, new friends and local songwriters, sleeping on couches, in his car at truck stops or sometimes not at all. He was looking for something…for those experiences you cannot have in a college environment or working the same job every day. He was looking to experience life and humanity.

It was those experiences that inspired the songs on his first solo release, the 2007 EP, Birmingham, which included an early solo recording of the fan favorite “Fires”.

In 2009 he returned to Nashville to record his first full length album, American Soil.  This album and his constant touring helped build a small fanbase in most major cities throughout America. In 2011, the full band recording of “Fires” from this album was featured in the popular Grey’s Anatomy spin-off show Private Practice.

2011 saw the release of his second EP entitled STRANGETOWN, inspired by his experiences in his new home of Austin, TX. The song “Shoeboxes” received much critical and fan acclaim and for the first time he began to receive national press and attention. PASTE magazine tweeted after the release of the EP “David Ramirez – the best damn songwriter you don’t know yet”.  He was also asked to open a few shows for The Civil Wars during this period, which also helped raise his profile.

In August 2012, David released his second full length album, Apologies, which entered the Billboard Folk Charts at #4 and received rave reviews from The New York Times and PASTE. A co-headline tour with Noah Gundersen and a series of shows supporting Gregory Alan Isakov helped raise David’s touring profile during this time. He also began to sell out venues on his own in cities like Austin, Dallas, Atlanta and Nashville.

2013 saw the release of his third EP, The Rooster, which featured the fan favorite “The Bad Days”. Go to any shows of David’s and almost the entire crowd will sing the chorus to the song.  All releases thus far had been completely self-funded and self-released.

In 2015, FABLES was released. This marked the first time an album was released with a label partner, Nashville-based Thirty Tigers. And also for the first time, David had a proper budget to record an album and hire a band to tour with. The album was produced in Seattle by friend Noah Gundersen. The release gained critical acclaim from NPR, The Wall Street Journal and Stereogum. The lead single, “Harder to Lie” was a big hit on Spotify, being featured on New Music Friday and peaking at #9 US Viral Hits. It currently has almost 5 million streams and has become a favorite of fans. The FABLES Tour saw many sell out shows including for the first time, cities like Toronto, Seattle, Los Angeles, Oklahoma City and many more. He also sold out his very first UK show at Hoxton Square Bar in London on this album cycle, as well as receiving airplay and accolades by BBC’s Bob Harris. During this album cycle he also made his first major festival appearances at Shaky Knees in Atlanta and Free Press in Houston.

In the Fall of 2016, David embarked on the BOOTLEG TOUR. A solo tour of 53 cities in North America over 2 months, where…inspired by the Grateful Dead, each show was recorded in full by a sound engineer and offered as a free download link to any person who purchased a ticket to the show. “Buy a Ticket, Get a Download” was the credo of the tour. No opening act, just David playing almost 2 hours every night for 53 nights. The tour was a huge hit with fans, and one that will occur every few years moving forward.

The new album is David’s 4th full length, entitled We’re Not Going Anywhere and is quite the leap forward, sonically. It’s an expansive sound influenced by some of David’s favorite 80’s bands like The Cars and Journey, and lyrically reflective of the intense political landscape in America and his bi-racial viewpoints . It releases September 8, 2017 via Thirty Tigers.
Our Violet Room