with Float Like A Buffalo
The Black Buzzard at Oskar Blues @ 8:00 pm Ages 18 and Up 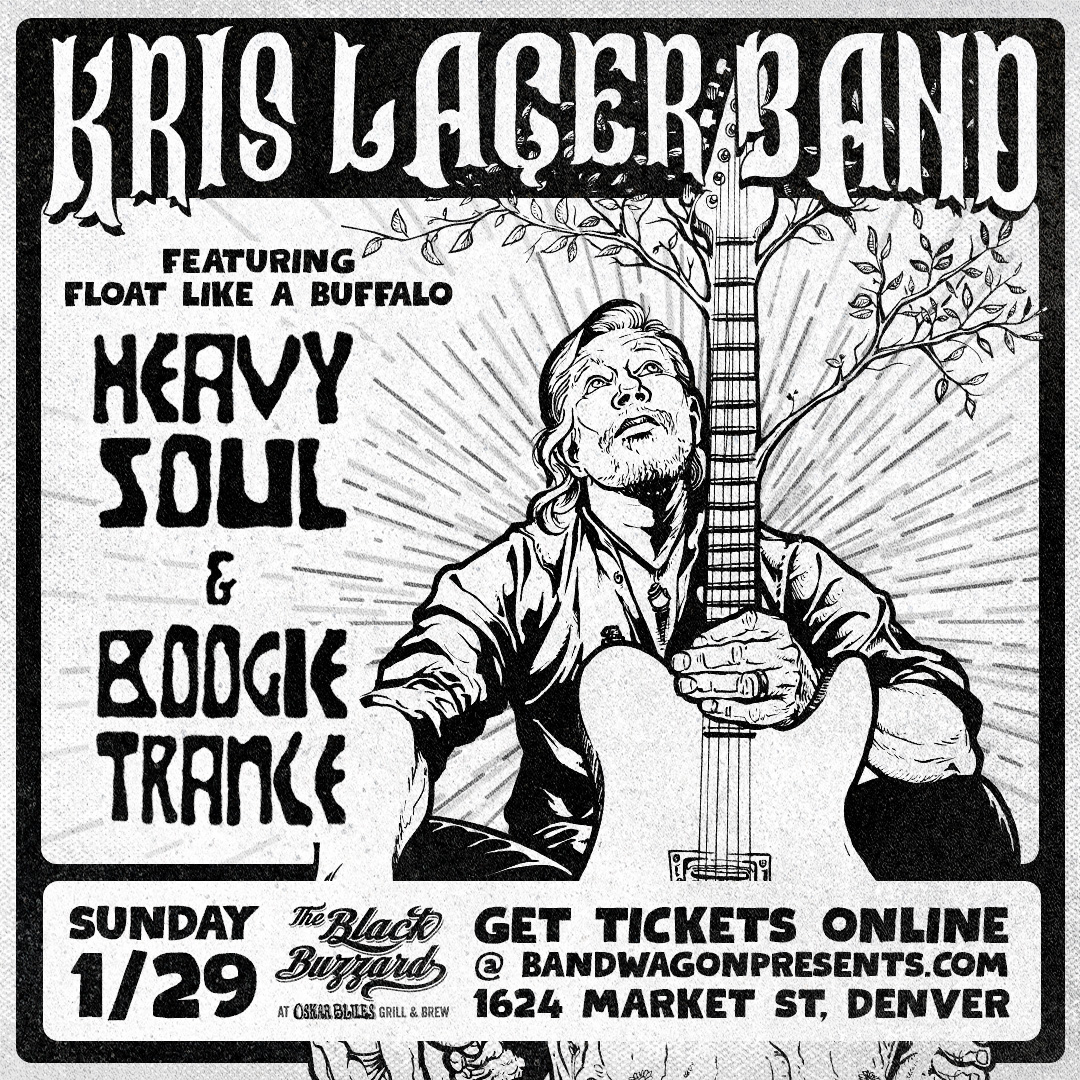 Kris Lager has become an underground cult hero of sorts.  An uncompromising musician and charismatic performer who has cultivated a grassroots following and a career spanning over two decades. He has developed a unique  'Celebrate Life' message and mantra that emanates with every performance.  A message that creates a congregation of dancing, singing, and clapping people with smiles on their faces everywhere he goes.

He has fused together his passion for blues, soul, funk, zydeco, country, and almost every other ‘American Roots Music’ into a contemporary and refreshing musical gumbo full of soul and spiritually uplifting rhythms and melodies.

Many people are calling him one of the finest songwriters, performers, and guitarists of his generation and for good reason too. Kris Lager’s gravely voice and stirring lyrics combine the realness and authenticity of the blues with a keen sense of the human condition.

​Last year World-Renowned Musician and Podcaster, Andy Frasco called Kris "His favorite songwriter!” and also said Kris has inspired a lot of his songs and his desire to have an upbeat and positive stage persona.

Paste Magazine explains the music as "The kind of toe-tapping rhythm that sometimes you just need to make it through a day."

A Lincoln native based out of Omaha, Nebraska, Kris and his band have built a reputation as a hardworking Independent band refusing to play by industry rules or pander for awards and accolades.  They just hit the road and the stage with an intense purpose of expressing themselves through uplifting music while engaging and respecting their audiences.

Kris Lager Band has been hard at work for over a decade spreading and honing their Revivalist Rock, Heavy Soul & Boogie Trance music across the country. When it comes to energetic and heartfelt live music performances KLB is second to none. They have worked with, toured, and recorded alongside some of the industries finest. All the while managing to avoid the pitfalls of the road and the rock’n'roll lifestyle that far to often derail a band on the verge of breaking out.

Their new album ‘Heavy Soul & Boogie Trance’ is a continuation to their ever exploring musical tastes and approach. An all analog and mostly live recording produced by Kelly Finnigan & Ian McDonald of Monophonics fame features their trademark lo-fi sound. The record was recorded in the bay area at Transistor Studios and mixed by Sergio Rios of the stellar funk ensemble, Orgone. It is a powerful statement of road life, love & romance, a splash of social commentary, and a few old fashioned fun jams. All tied together with heavy guitar grooves, funky drums, thick keys, and powerful bass.

The record is a follow up to their Tab Benoit produced recording Platte River Runaway which showcases a more laid back and bluesy effort. The Louisiana legend helped bring to life a strong bluesy and country side that hasn’t been showcased very often from these troubadours. The recording was conceived after a swamp ride off of the Intercostal Canal of Louisiana’s bayou. Tab believed that if they were going to make a record together they’d first have to get a little taste of the swamp and experience treeverb. The sound of the music reverberating off of the water and the cypress trees. Which Tab mimics on one of the key tracks ‘Slow Down’. Through that boat ride and ‘near death experience’ another KLB live staple came to life, ‘Sunshine On The Bayou’

KLB is spearheaded by singer, guitarist, and songwriter Kris Lager, who rips out face melting solos and hypnotic riffs. Jeremiah Weir on keyboards and percussions is the perfect melodic counterpart and always brings the high holiness to the stage. The backbeat of the band is brought to you by freestyle extraordinaire John Fairchild, who has logged seven years with the group and is a tour de force on the kit. Brandon Miller rounds out the ensemble on bass with a solid low end that holds it all together and a high kick Chuck Norris would be proud of.

Float Like A Buffalo
“Float Like A Buffalo embraces a celebratory, carefree spirit on “Enjoy the Ride”. Lyrically they embrace a sense of optimism in the future, as their highly articulate storytelling gives small snapshots from a life lived most fully. Elements of psychedelic rock, indie rock, with a hint of funk tying it all together making it radiate with pure joy.”